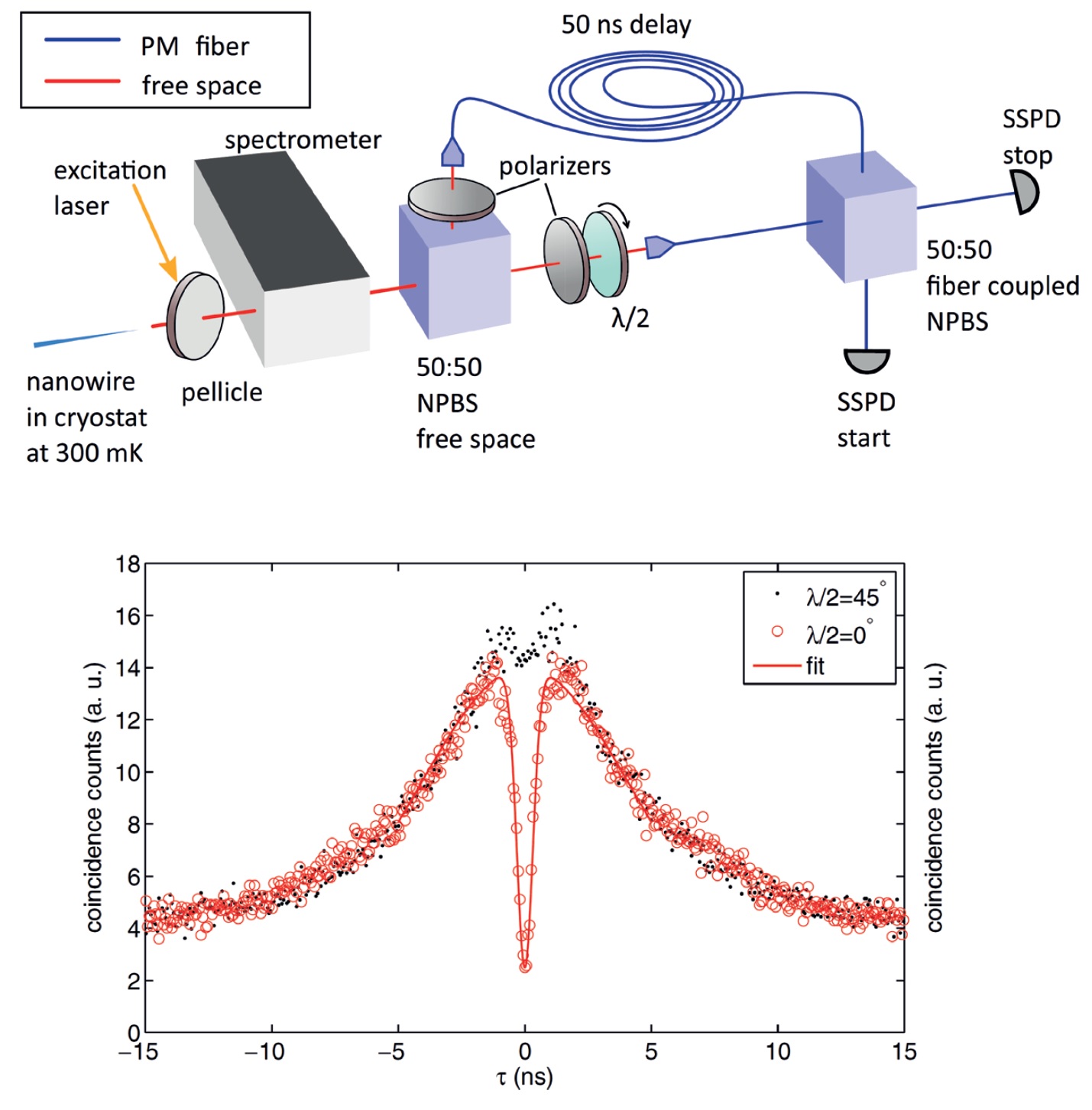 In this experiment, two subsequently created photons from a quantum dot in a nanowire are travelling in the fiber-based interferometer. A non-polarizing beam splitter (NPBS) splits the short path from the long path of the interferometer. The delay on the long path is precisely matched to the repetition rate of the laser (20 MHz), so that the two photons interfere at the second NPBS. A single photon traveling the long path interferes with the next subsequent photon traveling the short path all in polarization-maintaining (PM) fibers. Two Single Quantum superconducting detectors are monitoring the output ports of the beam splitter. The single photon detector output is correlated in time to record coincident detection events.

The minimum of the coincidence counts drops towards zero when the two photons are identical in all properties and they have a good temporal overlap at the beam splitter. In contrast, when the two photons are perfectly distinguishable, for example if the polarization is rotated by 90 degrees in one of the two arms, the dip completely disappears. The precise shape of the dip is directly related to the frequency spectrum of the single-photon wave packet, and the time overlap of the photons and timing jitter of the photon detectors. 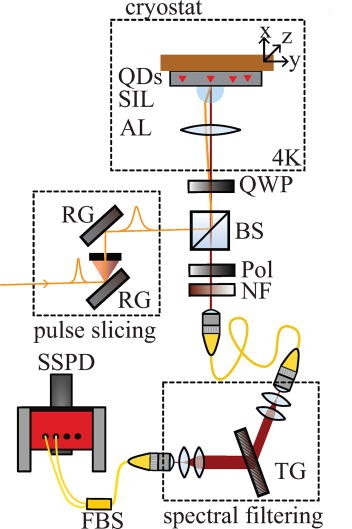 A typical setup for probing photon antibunching is a Hanbury-Brown and Twiss (HBT) interferometer, which comprises of a beam splitter and two photon detectors. The output of the photon detectors is time-correlated to measure the number of coincidence counts.

In research presented by Schweickert et al., a single photon emission with unprecedented purity was measured from a quantum dot (QD) sample using a Single Quantum Eos. The QD sample, GaAs/AlGaAs quantum dots embedded in a low-Q planar cavity, is obtained by Al-droplet etching on Al0.4Ga0.6As followed by deposition of 2 nm GaAs. Single photons are generated from a single QD biexciton that is coherently excited via a pulsed two-photon excitation (TPE). The excitation scheme is shown in the left figure. Since the excitation energy is detuned from the emission energies of both biexciton (XX) and exciton (X) emissions, the biexciton photons can be spectrally filtered and sent to an HBT interferometer for probing the photon statistics. The interferometer is constituted by a fiber-based 50:50 beam splitter to send the photons to two superconducting single-photon detectors in the Single Quantum Eos.

A single-photon source with unprecedentedly low multi-photon emission is achieved. The antibunching measurement results shown on the right report a record g2(0) of 7.5 x 10-5, which is obtained without any background subtraction or temporal post-selection. This result was made possible by using two superconducting single photon detectors with a FWHM timing jitter of 20 ps and 30 ps and ultra-low dark count rates of <6 x 10-3 Hz and < 18 x 10-3 Hz, respectively. For these dark count rates and for the biexciton wavelength of 795 nm, the detection efficiency is largely outperforming that of any semiconducting avalanche photodiode.

The presence of fine solid particles in the atmosphere can have dangerous effects on health. Monitoring the concentration of such particles is thus of high importance. Light detection and ranging (LIDAR) techniques such as linear depolarization ratio (LDR) allow for continuous monitoring of aerosol concentration with both high spatial and temporal resolutions.

A high performance Single Quantum Eos is used to guarantee a high signal-to-noise ratio at 1.5 μm, thus avoiding the use of high pulse-energy lasers. The laser repetition rate is set to 9.5 kHz. The pulse width of the laser is set to 200 ns, resulting in a spatial resolution of 30 m. In the receiver system, a time-division multiplexing module is implemented to separate the two orthogonal backscatter signals in the time domain by 40.3 μs. Hence, a single superconducting single photon detector is used to measure both polarization signals. The collected back-scattered signal from the atmosphere is coupled into a polarization-maintaining single mode fiber by using an 80 mm coupler, which has a narrow field of view of 47.6 μrad that suppress background radiation from the sky.

The linear depolarization ratio (LDR) of the urban aerosol in the city of Hefei, in China, is monitored for 48 hours with 30 m spatial resolution and a detection range of 4 km. The measured increasing values of DLR are in good agreement with the haze distribution forecast released by the China Meteorological Administration and an additional visibility LIDAR working at 532 nm. Moreover, sharp localized bursts of heavy air pollution are detected during the day at locations where buildings are under construction. There are multiple advantages to using a wavelength of 1.5 μm. For one, it allows for the detection of large particles, which is important for PM10 analysis in polluted environments. Secondly, it enables daytime measurements due to reduced background scattering from the sky as compared to the visible range. Thirdly, high performance optical components manufactured for the telecommunication industry are available at relatively low cost.